For the first time the nexus between food systems and climate will be central on the agenda at the Conference of the Parties of the UNFCCC (COP27). The agricultural sector is most vulnerable to climate change and simultaneously a huge contributor to it.

During this session members of the COP27 Dutch delegation explained how the negotiations on the climate agenda work in practice and elaborated on their position and expectations relating to food systems, sustainable agriculture, nature and forests within the climate agenda. This included a broad range of topics like climate finance, adaptation, (market-based) mitigation and global deforestation and forest segregation. Thereafter, representatives from Rabobank, RNW media and Clim-EAT shared their plans for the COP27 summit.

Climate Envoy of the Netherlands, H.R.H. Jaime de Bourbon de Parme, began by setting the scene and underlining that the world has changed since COP26 in Glasgow last year. There are more geopolitical tensions, and quite a few countries tried to step away from the 1.5 degrees Celsius goal. Political tensions might also hinder collaboration between China and the United States. Nevertheless, the COP27 Pre Summit provided more perspective for negotiations at COP27. Some positive developments are seen in the positions of Australia, Turkey and the United States.

COP27 will highlight many concerns and examples from Africa as the continent deals with substantial consequences of climate change, while African countries feel they have not contributed much to it, continued De Bourbon de Parme. African countries, among many others, will stress the importance of adaptation finance. Specifically in relation to the 100 billion dollars promised in 2009 which has not been fully delivered yet. Egypt is aiming for an implementation summit wherein many examples on implementation will be highlighted, which is a strong call to action. It is good to see that this time the relationship between food and climate is central, there are a lot of potential wins in this domain. Nature and forests are also important for carbon capture solutions.

In conclusion, Jaime de Bourbon de Parme called for an approach oriented towards concrete solutions, which makes use of all the expertise that is available. He further explained that we should not approach challenges from a blaming perspective, but use expertise and partnerships to work towards concrete solutions. He hopes that it will be a COP of ambition, implementation and solidarity.

Lucas du Pré, Senior Policy Officer for Global Climate and Food Security at the Dutch Ministry of Agriculture, Nature and Food Quality, was the first member of the Dutch delegation to provide an update on the negotiations, focusing on agriculture.

The negotiations are a process with all parties present, in view of reaching consensus on certain topics. These include the overarching themes: mitigation, adaptation, climate finance and loss and damage.

In the negotiations, parties don’t usually take a sector approach. This is because countries have the sovereignty to decide for themselves in which sectors it is most useful to mitigate.

The agenda topic on agriculture is called The Koronivia Joint Work on Agriculture (KJWA). This is a landmark decision under the United Nations Framework Convention on Climate Change established in 2017. It underlines the interlinkages between climate change, agriculture and food security and consists of a roadmap with expert meetings and workshops on topics related to agriculture. During COP27, parties have to agree on what has been concluded under the KJWA; this could also serve as guidance for other institutions inside and outside UNFCCC. The Netherlands and the European Union will pay attention to all aspects: adaptation, mitigation and finance.

Parties also have to decide on the future of the KJWA. There are different views on this. Some parties want to further the roadmap while others want a specific fund for agriculture. There are also parties who wish to earmark climate finance for agriculture. The Netherlands and the European Union do not want earmarked funds for agriculture because they feel that countries themselves are in the best position to decide how to spend funds.

Delegation members will also participate in informal activities, which take place in the different pavilions and side events hosted by different countries and organisations. Visit the overview here.

Nature and forests are interwoven in different agenda items

Heloïse van Houten, Policy officer at the Ministry of Agriculture, Nature and Food Quality, pointed towards the importance of nature and forests in the climate agenda. There will not be a specific agenda item on the topic, but it is interwoven in different agenda items.

Nature and forests are prominently visible in the negotiations about Article 6 of the Paris Agreement. This provides a framework that allows countries to voluntarily collaborate with each other to achieve their mitigation actions set out in their nationally determined contributions. It establishes a new carbon crediting mechanism under an international oversight and a framework to engage in non-market approaches.

The conclusions reached about article 6 at COP26 in Glasgow gave new momentum to the debate on the role of market-based mitigation in the forest sector. A recurring point is what qualifies under the new article 6 mechanism (discussion related to Red++ ) and how to deal with avoided emissions under the article 6 mechanism.

The Dutch government and the European Union are committed to stop global deforestation and forest segregation as soon as possible and no later than 2030. Article 6 should support all forest activities that result in emission reduction and carbon sequestration improvements, including Red++ activities. However, all these activities should fully comply with article 6 rules. The Dutch position is that Article 6 activities may only be based on emission reductions and carbon sequestrations, while avoided emissions should not be included.

Eva Schreuder, Policy coordinator climate change and the deputy delegation leader for the COP27 of the Dutch Ministry of Foreign Affairs, continued the meeting by elaborating on the role that finance plays during COP27.

The Climate Finance Delivery Plan Progress Report 2022 was published, in which donors lay out how they will meet the 100 billion goals as soon as possible, and hopefully in 2023.

During COP27 negotiations will continue on a new climate finance goal under UNFCCC for the period from 2025 onwards. This relates to the ambition of the EU to align all the climate finance goals with the Paris agreement. The Netherlands wants to initiate a discussion about the role of different actors in contributing to climate finance.

There is also a discussion about its sub-goals, for example the percentage of climate finance stemming from public or private sources. The European Union position is to keep a more generic set of goals as this enables demanding countries to set priorities.

Financing for loss and damage will also be an important topic at COP27. It entails the financing of costs of disasters that already took place due to climate change. There are many different ways to finance such costs. The discussion during COP27 about how polluting countries can contribute to minimise and address this loss and damage effect for developing countries will therefore be a challenging one.

During a debate in Dutch parliament, The Dutch Minister for Climate and Energy Rob Jetten said that the Netherlands should aim to entertain a discussion that is as broad as possible and simultaneously shows openness and coherency in which we have the opportunity to listen to each other. Eva Schreuder concluded by stating that the Netherlands should be as constructive as possible.

Two take-aways from the Q&A with the Dutch Delegation

Soil carbon farming. Du Pré: There are several new initiatives in the domain of soil carbon farming which the Dutch government is currently analysing and reflecting upon. We acknowledge it as an important topic. It is still to be seen whether or not The Netherlands can play a role in such initiatives.

Insurance mechanisms and parties. Schreuder: Insurance does play an increasing role in the whole loss and damage discussion. For example during their G7 presidency, Germany launched an initiative on a global shield that should enable countries to insure themselves among other things against climate disasters, and the Netherlands recently has given political support to this initiative. The Ministry of Foreign Affairs is also exploring its role in the further operationalising of climate insurance mechanisms.

Several NFP network members as well as staff members from the Ministries of Foreign Affairs and Agriculture, Nature and Food Quality are actively engaged in the COP27. Many are cohosts of side-events, in which the announcements have been included on the NFP website. Three representatives were asked to share their main expectations in this meeting:

Rabobank - Finance
Suzanne van Tilburg, Global Head of Food and Energy Networks at Rabobank, explained why Rabobank is going to COP27. “We want to be inspired on what the global pathways are to address the energy transition worldwide, including crossovers with food.” Suzanne emphasised the need to focus on finding the solutions, including policy interventions, which are required to scale already existing business solutions. For this to materialise innovation and finance from both the public and private sector will be crucial and mutual connections are key. Additionally, Rabobank wants blended finance to be more successful, and hence to be part of the agenda on climate finance discussions. They see a need for a global framework on what impact investments and impact finance entails.

Clim-EAT is a think and do tank on food and climate hosted by NFP. Founder Dhanush Dinesh highlighted the session on food systems during the world leader summit: this is the first time at a climate COP that heads of state will talk about food and agriculture. On 12 November, there will also be a thematic day on food, agriculture and nutrition. The Egyptian presidency will launch two initiatives. One is on Food and Agriculture for Sustainable Transformation (FAST). The second is called Initiative on Climate Action and Nutrition (ICAN). In the food systems pavilion, Clim-EAT will host, with other partners, 11 days of programming and more than 100 events on food systems transformation. Dhanush describes what the pavilion is trying to do in 3 key words: Solutions, Partnerships and Systems.

Machtelt Oudenhuijzen, Partnership Lead at RNW media, will travel to COP27 with 15 young media makers from the MENA region. They will share positive stories at COP27 and represent young people from the Arab world. The media makers were invited by Jacob Waslander, the Netherlands envoy for the MENA region on water and energy. On 15 and 16 November, they will share some of the solutions that have already been developed in communities. Some of these young people are entrepreneurs in fair fashion, beauty or biochemicals.

A role for us all

Interim director of the NFP Han de Groot concluded the meeting by stating that there is a great need for cooperation and a great need to put things in practice. COP27 is very high level and delegations have quite some trouble in translating their words into action and making binding commitments to certain sectors. We all need to work together to achieve this. 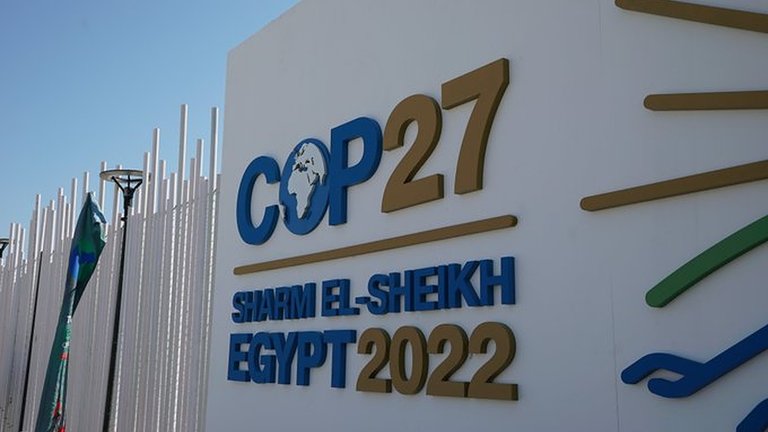 The outcomes of COP27 in relation to agriculture, food systems and nature were discussed at an online NFP network meeting on 12 December 2022. There was a mixed picture from both panelists and participants in terms of the outcomes. 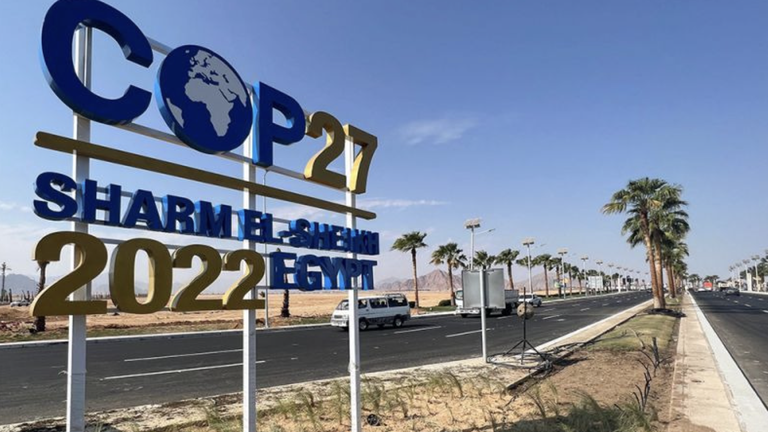 This list shows relevant commitments, pledges and initiatives related to the Food-Nature-Climate agenda at COP27 and presents an overview of insightful articles and different opinion pieces. This list is by no means complete.
See all news